It is believed that Lord Sri Venkateswara enjoys festivals (utsavams), and therefore, every moment in Tirumala is considered a festive occasion. The most important festival is the Brahmotsavam. The main activities carried out during Brahmotsavam are   AALAYA SUDDHI Before the commencement of Brahmotsavam, the temple of Lord Sri Venkateswara is cleaned according to the guidelines given in the religious texts. The temple premises and its surroundings are decorated with flowers and mango leaves. This process is called Aalaya Suddhi and Alankaram (decoration). MRITSANGRAHANAM Mritsangrahanam (the process of collecting earth) is carried out on the day prior to the first day of Brahmotsavam. The temple officials pray to deities like Vishvaksena, Anantha, Sudarshana and Garuda. They also pray to Mother Earth and collect a small quantity of earth, with which the Ankurarpanam ritual is conducted, by which the earth is spread in a room and nine kinds of cereals are sown in it. DWAJAROHANAM AND DEVATAVANAM Dwajarohanam (hoisting the flag or garudadhwaja) signals the start of the Brahmotsavam. It is carried out at the Dwajasthambham, near the Nadimi Padi Kavili inside the temple complex. The temple officials hoist the flag (with a picture of Garuda on it) to the chanting of Vedic mantras by the temple priests. It is believed that Garuda goes to Devalokam to invite Gods like Brahma, Indra, Yama, Agni, Kubera and Vayudeva and sages like Vasistha and Vishwamitra. VAHANA SEVA The Lord is taken in a procession around the streets of Tirumala on different vahanas (vehicles). Each vahana has its own significance, and conveys the Lord’s message in its own way. SRIVARI KOLUVU During Brahmotsavam, the Lord holds court in the main temple, after being taken around in a procession. The temple priests perform Naivedyam during this time. SNAPANAM Snapanam (also called the Utsavananthara Snapanam) is the process of bathing the Lord with herbal water after the procession. It is believed to relieve the strain the Lord has undergone during the procession. CHOORNABHISHEKAM Choornabhishekam involves bathing the lord and his consorts after anointing them with sandalwood powder. This is done on the morning of the ninth day of the Brahmotsavam. The Lord is then taken in a procession around the streets of Tirumala. The temple priests distribute the sandalwood powder used for the Lord to devotees. It is believed that the sandalwood powder has the power of clearing obstacles from one’s path. CHAKRASNANAM The Chakrasnanam ritual is akin to the bathing ritual after the performance of a yagna. On the morning of the last day of Brahmotsavam, the Lord, his consorts and Sri Sudarshanachakram are bathed in the Swami Pushkarini. Devotees can also bathe in the Swami Pushkarini, along with Sri Sudarshanachakram. It is considered to be a very sacred ritual, and devotees participate in this ritual, irrespective of religion, caste or creed. DEVATODWASANAM On the last day of Brahmotsavam, the ritual of seeing off the rishis and Gods to Devalokam is called Devatodwasanam. It is performed after the daily archana. Lord Brahma is praised for organising the utsavam, and He is honoured by the temple priests and officials. DWAJAVAROHANAM Dwajavarohanam or lowering the flag (hoisted on the first day of Brahmotsavam) is carried out on the evening of the last day of Brahmotsavam. BRAHMOTSAVAM CELEBRATIONS – FIRST DAY 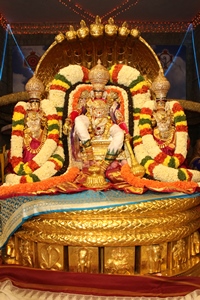 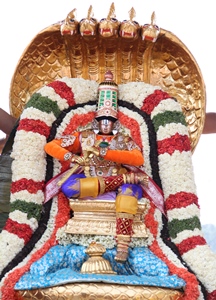 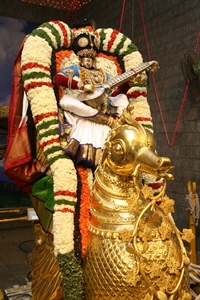 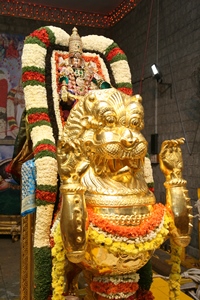 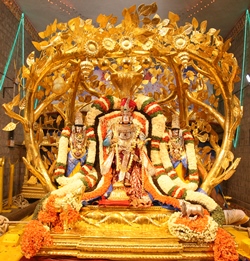 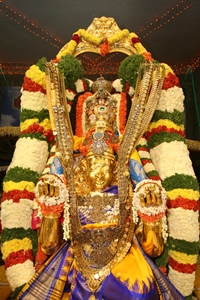 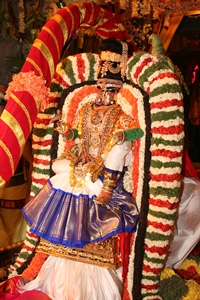 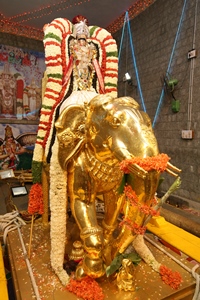 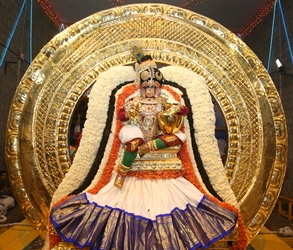 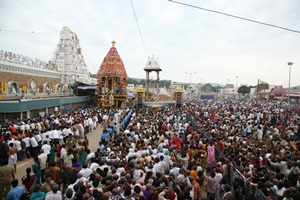